- July 07, 2018
Error while creating node: Docker has returned an error: Cannot connect to host docker:80 ssl:False [No such file or directory]

After adding docker template for Alpine Linux in gns3, you get above mentioned message when you want to use alpine linux in GNS3.

To get rid of this message you have to install Docker by following below link
curl -fsSL https://get.docker.com/ | sh

If you do not have curl installed then instal curl first with below command.
apt-get install curl

After installing Docker you need to add your user name in the docker group with the following command.
$ sudo usermod -aG docker your_username

Popular posts from this blog

- August 12, 2018
I was getting this error while removing Operating System ISO image mounted on the Virtual Machine.

What worked for me, is
1. Uncheck the "Connected and Connect at power on" from Device Status.
2. Then Change the Device type from "Datastore ISO File to Client Device" Radio Button
3. and press OK to save the changes.

Note:- I was able to remove the mounted ISO only by directly logging to the ESXi at https://esxi-ip-address/ui

"The guest operating system has locked the CD-ROM door and is probably using the CD-ROM, which can prevent the guest from recognizing media changes. If possible, eject the CD-ROM from inside the guest before disconnecting. Disconnect anyway and override the lock?"

You need to select yes to eject the CD-ROM and then remove the ISO file successfully.
Read more

a file I/O error has occurred while accessing vmware converter

- August 29, 2018
While converting physical Windows 7 machine to Virtual machine of infrastructure type, I got this error. The error seems it is unable to read/write source or destination datastore.

I have installed VMware-converter-en-6.2.0-8466193 on Windows 7 physical machine with option locally selected. (not at server/client option)

All of my ESXi servers are connected to the vCenter Server, so I had to use vCenter Server's IP address to send this physical machine to the virtual world.

After adding dns eteries to the hostfile of windows 7, I am not getting this "a file I/O error has occurred while accessing vmware converter" and the migration has started.
Read more

How to import Putty Saved Connections to mRemoteNG 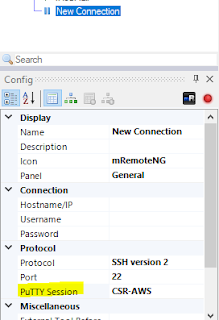 As new user I configured some remote desktop connection which was quite easy to figure out. But when I wanted to add SSH connections, it came in my mind to import all of the saved connections in the putty. But I couldn't figure it out how can it be done, though it was quite easy and here are the steps.


Open your mRemoteNGCreate a folder if you want segregation of multiple networksCreate a new connectionEnter the IP address of remote server under connection in Config paneUnder the config pane, select protocol "SSH version 2".  Once you select protocol to SSH version 2 you are given option to import putty sessions, as shown in the snap below.


In the above snap, I have imported CSR-AWS session from my saved sessions in Putty.